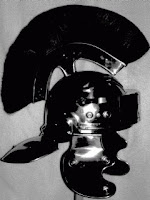 For those of us voting in the MEP elections in the South East yesterday, weren’t you just a little bit tempted to waste your vote in voting for ‘The Roman Party. Ave!’? I was, then reason overcame me and I voted more conventionally instead.

I was intrigued however to look up The Roman Party. Ave! There’s virtually nothing on them, no web site or anything. But one source I did eventually uncover had interviewed its leader a couple of years ago. The party is a one man band – a French bus driver, no less, called Jean-Louis Pascual, who has lived in Reading for over 12 years. He wants to gain enough power in England so he can return to France and make his challenge for recognition there. Apparently the name of his party refers to the old proverb “When in Rome, do as Romans do”, and how he tries to fit in in his adopted home. Bon chance, Jean-Louis!

READ - REVIEW SOON:
Iron Curtain by Vesna Goldsworthy
Midlife by Andrew Jamieson
The Glass Hotel by Emily St John Mandel
The Half Life of Valery K by Natasha Pulley
One Day I Shall Astonish the World by Nina Stibbe
The Last Battle by CS Lewis
The Facemaker by Lindsey Fitzharris
Fish Swimming in Dappled Sunlight by Riku Onda

MY DAD (91) IS READING: Before I Go To Sleep by SJ Watson

© AnnaBookBel 2020. Unauthorised use and/or duplication of this material without express and written permission from this blog’s author and owner is strictly prohibited. Excerpts and links may be used, provided that full and clear credit is given to AnnaBookBel with appropriate and specific direction to the original content.